Taking the Law into their Own Hands

Taking the Law into their Own Hands:
Hortense Sparks Ward, Alice S. Tiernan, and the Struggle for Women’s Rights in the 1910 Harris County Courthouse
By David A. Furlow

If you pay close attention to the large “Bench and Bar of Houston, Harris County, Texas” facebook exhibited in the “Historical Display” section of the sixth floor of the 1910 Harris County Courthouse, you might have noticed photographs of two women on the bottom of the page. The two women, Hortense Sparks Ward and Alice S. Tiernan, brought the nation-wide battle for women’s rights to Harris County’s 1910 courthouse. This is their story. 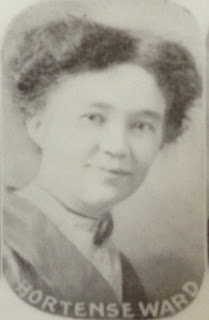 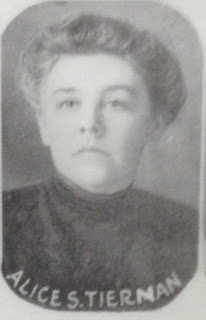 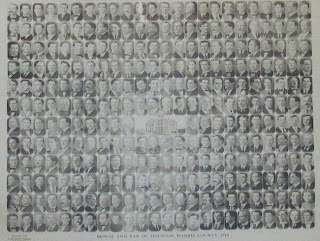 Born to Frederick and Louise Sparks in Matagorda County on July 21, 1872, Hortense Sparks Ward grew up in Edna and went to school at Nazareth Academy, a Roman Catholic convent school, before returning to Edna in 1890 to teach school. The next year, in 1891, she married an Edna man, Albert Malsch, and bore him three daughters: Mary, Marguerite, and Hortense. In 1903, the couple moved to Harris County, where the marriage faltered. On 11 May 1906, Hortense divorced Albert in a Harris County court. Her divorce petition explained that her husband, Albert, “is lazy and of no account, and…works only about half of the time…”

While working as a court reporter to make ends meet, Hortense began the study of law, through a correspondence course. Three years later, Hortense married her second husband, William Henry Ward, a Houston lawyer. In 1910 she passed the State Bar examination, earning a rank of second out of all applicants who took the test. Hortense became Texas’ first licensed woman attorney to practice law. Another woman, Edith Locke, had previously been admitted to practice law, but she left no record of ever exercising the powerful right she earned. Hortense, in contrast, transformed Texas law.

Hortense and her husband W. H. Ward practiced law together in Houston, as partners, before Harris County voters elected her husband as a county judge. Like many other early women attorneys, she avoided taking cases to Harris County’s all-male juries, leaving the firm’s litigation to her husband. Although she did not argue in Texas courts, she wrote or helped write many of the briefs her husband filed. Hortense was at least seventy years ahead of her time; she anticipated the complicated lives of late twentieth century and twenty-first century lawyers by practicing law with a lawyer spouse while raising three children. As late as 1939, seventy-six percent of women practicing law remained childless, while only three percent were raising three or more children.

Hortense soon began using newspapers to make a case for the reform of women’s rights and status. On April 1, 1911, Hortense published an influential article in The Houston Chronicle entitled The Legal Status of Married Women in Texas. The article helped convince the Legislature to grant women the right to enter into commercial contracts, but the reform failed to satisfy Hortense and her supporters. Redoubling her lobbying, she convinced the State Bar to adopt a resolution recognizing the right of a married woman to exclusively manage and control her separate property; keep, control, and dispose of her own earnings independent of her husband; and to contract as a free individual.

In 1912, the Delineator, a popular woman’s magazine, published Hortense’s pamphlet, Property Rights of Married Women in Texas. Hortense pointed out that, in Texas, a husband “may even mortgage or sell every piece of furniture in the home, and [the wife] is helpless to prevent [it], even if her earnings have paid for every piece. He has a right to sell her dresses if he sees fit.” The Texas Federation of Women’s Clubs, the Texas Congress of Mothers, Texas’ then-powerful progressives, and fathers who feared that their daughters might marry a wastrel or a bum persuaded the Legislature to enact the Married Women’s Property Act in 1913. The resulting statute gave Texas women “the power to make contracts, giving the wife control over her separate property…giving her control over the rents from her separate real estate, interest on bonds and notes, and dividends on stock owned by her…”

During the second decade of the twentieth century, Hortense led the Texas suffragette movement – by example. On February 25, 1915, she and her husband were both admitted to practice before the U.S. Supreme Court, making her the first Texas woman admitted to practice in the highest court in the land.

In March 1918, the Legislature enacted a statute that granted Texas women the right to vote in primary elections. One year later, Texas became the first Southern state to ratify the Nineteenth Amendment to the U.S. Constitution, which authorized women the right to vote in all elections. As President of the Harris County Equal Suffrage Association, Hortense became the first woman to register as a voter in Harris County, on June 18, 1918. She achieved another distinction in August of 1923, when Houston’s City Council appointed her as a judge of its Corporation Court, where she served six days as Texas’s only female judge of a police court.

In 1925, Governor Pat Neff, a Progressive Democrat, appointed the first all-female state supreme court in U.S. history to decide an important insurance case, Johnson v. Darr. The Darr case presented an important issue: whether trustees of a fraternal organization were entitled to exercise ownership of two tracts of land in El Paso. After the Forty-First Judicial District Court of El Paso County granted Trustees J. M. Darr, W.S. Barnes, H.A. Borcherding, and E. P. Jones clear title to only one of those two tracts, they appealed, and the El Paso Court of Civil Appeals overruled and awarded them full title to both tracts. Darr presented a problem for the Texas Supreme Court. The Woodmen of the World was a politically powerful insurance association whose membership included many prominent men. When Darr reached the Texas Supreme Court, all three Texas Supreme Court Justices were members of the Woodmen with a financial stake in the outcome of the case that required their disqualification and replacement.

When the Texas Supreme Court’s three then-serving justices disqualified themselves in Darr, Governor Neff sought three substitute justices capable of serving on a special court. Shortly before the inauguration of Miriam “Ma” Ferguson as Texas’ first female governor, Governor Neff appointed Hortense and two other recently-licensed Texas attorneys to serve as a special panel of the Texas Supreme Court. The editor of the Dallas Morning News celebrated Governor Neff’s appointment of a three-woman court: “All records were shattered [because of Governor Neff’s] healthy New Year gift of recognition to the woman barrister of today. This is the first instance a woman has been appointed to sit on the supreme bench; it is the first time a higher court is to be comprised entirely of women.”

Since Governor Neff had chosen women to serve on other commissions and boards, an all-female court presented a simple solution to the problem of male disqualification. But Governor Neff and successor governors had appointed men to other special panels in Woodmen cases, so he did not have to name any woman to that panel. On January 1, 1925, Governor Neff appointed Nellie Robertson of Granbury, Edith Wilmans of Dallas, and Hortense Sparks Ward of Houston to hear Darr. Although Governor Neff could have chosen three women solely because of the unavailability of men, he probably sought to upstage Governor Ma Ferguson, whom he neither liked nor endorsed for election. Whether viewed as an objection to the corruption and criminal conviction of Ma Ferguson’s husband, Governor James “Pa” Ferguson, or an ironic comment on “Pa” Ferguson’s opposition to female suffrage, Governor Neff showed that he was more progressive than either his predecessor or his successor.

Leaders of the State Bar soon pointed out that Nellie Robertson of Granbury and Edith Wilmans of Dallas lacked seven years of legal experience, a constitutional requirement for service on the court under the Texas Constitution. After Robertson and Wilmans recused, Governor Neff appointed Ruth V. Brazzil Roome of Galveston and Hattie L. Henenberg of Dallas as associate justices, while retaining Hortense Sparks Ward as Chief Justice. Chief Justice Ward’s court convened on January 8, 1925, and granted the petitioner’s writ of error. Chief Justice Ward and Associate Justices Brazzil and Henenberg granted W.L. Johnson’s writ of error and scheduled oral argument for January 30, 1925.

On May 23, 1925, Chief Justice Hortense Sparks Ward’s special panel affirmed the El Paso Court of Civil Appeals’ decision, vindicating the full title to both tracts asserted by Woodmen of the World. “We are of the opinion that the instrument evidencing the trust was not required by the statute to be recorded and that the title of defendants in error was not affected by the attachment lien,” Special Chief Justice Ward wrote for the Majority. “We therefore affirm the judgment of the Court of Civil Appeals reversing and rendering the decision of the trial court.” Her colleagues, Associate Justices Brazzil and Hattie Henenberg, wrote concurring opinions. Subsequent courts have cited what some newspapers called the “Petticoat Court’s” Darr decision in more than thirty cases, including a 2009 decision written by Texas Supreme Court Associate Justice Nathan Hecht.

Hortense continued to participate in politics long after Darr came to an end. Throughout her life, she supported the prohibition movement as a means of protecting women and children from the excesses of alcohol, especially when consumed to excess by irresponsible husbands. In later years, Hortense opposed the influence of the Ku Klux Klan in Texas and elsewhere. She sought to regulate working hours, supported a woman’s right to serve as a corporate officer or director, and urged the Legislature to create domestic relations and family courts. 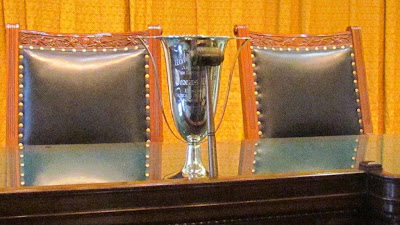 The Loving Cup Texas suffragettes awarded Hortense Sparks Ward, and the gavel she used as Chief Justice of the Texas Supreme Court in Darr v. Johnson.

Alice S. Tiernan, the other Houston woman whose face appears on the bottom row of the large “Bench and Bar of Houston, Harris County, Texas” facebook, played a different role in winning rights for women and women attorneys in Texas. Another of the first Texas women licensed by the Bar to practice law, she worked with her husband R. H. Tiernan. Unlike Hortense, Alice conducted appellate criminal litigation in her own name. Even as late as 1949, only one percent of women lawyers practiced trial law or defended the accused.

In Houston Chronicle Publishing Co. v. Tiernan, her husband sued their home town’s largest newspaper for publishing an allegedly defamatory 1912 story discussing Alice’s involvement in a barratry case instigated by the State Bar for prosecution by the District Attorney. The Galveston Court of Appeals’ ruling, which reversed a jury verdict and judgment for the Tiernans, helped decide the parameters of privilege in Texas defamation cases. Within a few years, Alice ended her controversial career as criminal appellate counsel. But the example she and other lawyers set as fierce defenders of individual rights inspired later generation to enter Harris County courtrooms, first as parties, then as lawyers, and finally as judges and justices.