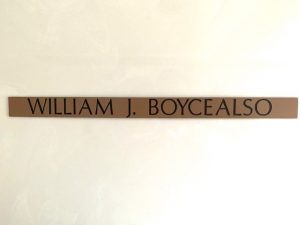 As I reflect on lessons learned while serving on the bench, my thoughts keep returning to one judge in particular.  This towering legal figure taught me important lessons about life in the law, and life in general.  Perhaps the most important lessons.

His name is Justice William J. BOYCEALSO.  Not Boyce.  BOYCEALSO.

Stay with me here, and I’ll explain.

I was introduced to Justice William J. BOYCEALSO when I was appointed to the Fourteenth Court of Appeals in 2007.  I was appointed at the same time as then-Justice Jeff Brown, who now serves on the United States District Court for the Southern District of Texas.  I’ll tell you why that detail is important in a moment.

I showed up for my first day of work at what was then the Court of Appeals’ location at 1307 San Jacinto.  The building had a small lobby on the ground floor so you could take the elevators to the 11th floor where the court was located.  Next to the elevators was a glass case with a building directory containing printed plastic strips showing the name of each justice.

I walked into the lobby on my first day and noticed that the Deputy Constable on duty was sitting at his desk, gently shaking with stifled laughter.  He didn’t say anything.  He just pointed at the glass case next to the elevator doors.

And that’s when I was introduced to Justice William J. BOYCEALSO.

I later learned how Justice BOYCEALSO joined the court.  When Justice Jeff Brown and I were appointed, a written work order was prepared for Harris County Facilities and Property Management.  This is the entity that runs and maintains all of the County’s buildings.

The work order’s instructions said two new plastic inserts were needed for the lobby directory:  one for Justice Jeff Brown, and another one for “Justice William J. Boyce — also.”  Someone read that work order literally.

Justice Brown and I had a good laugh over this mistake.  I kept my misguided directory name as a funny memento.

But as time passed, I decided that this nameplate is much more than an amusing bureaucratic misfire.  Justice William J. BOYCEALSO also has some lessons to teach me.

One takeaway is that Harris County employees are strict textualists.  They look at the document’s unambiguous language — not unexpressed, implicit intent gleaned from sources outside the document’s four corners.

More fundamentally, I’ve concluded that the jurisprudence of Justice William J. BOYCEALSO contains three important principles I try to bear in mind today.  Perhaps these principles can be useful to you, too.

Here is the first principle I learned from Justice William J. BOYCEALSO:  One judge is not a court.  I was one person in addition to many others working at the court.

This is of course true for any court of appeals, where judges sit in three-member panels and decide cases collectively by majority vote.  The heavy lifting on an appellate court gets accomplished in large measure by court attorneys who work closely with the justices.  Remember that you’re not arguing only to the justices — you’re also arguing to the attorneys who work with them.

This also is true of trial courts — even though, by definition, there is only one trial judge running the show.  But the trial judge is just the tip of the iceberg.

Many dedicated staffers work together to make a court operate smoothly.  Learn their names.  Treat them with deference and respect.  Do not be the lawyer who kisses up to the judge, but kicks down when talking with court staff.  In legal parlance, that’s bad karma.  And bad karma always comes back around.  Usually when you’re trying to set an emergency hearing.

This principle goes beyond the courtroom.  It applies regardless of type of practice.  Do not be the lawyer who kisses up to clients, or to more senior lawyers, but kicks down when dealing with others who appear on a lower rung of the organizational chart.  That too is bad karma.  It will come back to bite you.

Here is the second principle I learned from Justice William J. BOYCEALSO:  I am one member in addition to many others in the legal community.

I will boldly proclaim that no one has succeeded in the law based solely on individual effort.  Learning how to function cooperatively as part of a legal community is at least as important as learning how to “think like a lawyer” — and, in some ways, perhaps more important.

The lawyers I most admire remember that they are part of the legal community even as they compete fiercely within it.  They fight hard but fairly.  They don’t take cheap shots.  They don’t cut ethical corners.  They avoid name-calling.  They keep their word.  They treat the lawyer on the other side of the “v.” as an opponent — not an enemy.  They are gracious in defeat, and even more gracious in victory.

They do this because they recognize that Houston is a large city and a tiny village all at the same time.  The legal community is a small universe.  That’s true in Houston and beyond.  Conduct yourself as if you will see these lawyers again.  Because you will.

Finally, here is the third principle I learned from Justice William J. BOYCEALSO:  I am a lawyer in addition to other important roles.

This may be the hardest lesson to absorb.  After surviving law school, taking the bar exam, and launching a practice, it’s tempting to define yourself solely by your job title.

This principle goes beyond generic advice to strive for a well-rounded life outside of the law, eat a balanced diet, get eight hours of sleep each night, and exercise regularly.  That’s certainly good advice.  But I’m focusing on something else.

Whether your practice is civil or criminal, whether it’s conducted inside or outside of the courtroom, you will have opportunities to define yourself solely by your success.  I am a partner at firm X.  My income is X.  I am a courtroom warrior.  I am a judge.  I am an advocate for X.  I am the deal-maker.

If you really go all-in, then you will have opportunities to lose in the competition from time to time.  The lawyer who boasts of never having lost a case never goes to trial.

The “also” is especially important at this juncture.  The “also” means you will be able to rely on your connections with family, legal colleagues, and friends to rebound or figure out what comes next.

The “also” means you have areas of intellectual passion and community involvement that continue, and provide satisfaction, no matter what happens in the legal realm.

The “also” means you have resilience in addition to a title.

With apologies to Samuel L. Jackson and the good folks who sell Capital One credit cards, I invite you to ponder this question: